Apologies for the lack of direct Mississippi content, but this is heavily on my mind.

There is no doubt that the United States has a long-term debt problem. Our deficit is growing at an unsustainable rate. At the same time we are in the midst of the Bush Recession that threatens to double dip with the news of the collapsing Euro and the oil spill. Let us all remember that the only President since 1980 to run at a surplus was a "tax and spend Democrat". Bush 43 doubled the deficit from 5 trillion to 10 trillion. Does that drummed up Iraq war taste good or what?

There is a lot of populist clamor to cut federal spending, and I understand the sentiment. However the recession we are in does not allow for us to slice government spending at this point. The private sector has started recovery but the jobs are going to be slow to return. We are teetering on a double-dip recession and without public spending to make up for the lack of private it could be bad. We have to make the unpopular choice to create a jobs-based stimulus package that is substantial. The sooner we get folks back to work, the sooner they are paying taxes.

We cannot afford to sit idly while our economy slips into a five year stagnation. There will come a time once the economy is stabilized where austerity makes sense. There will be a time to cut spending and raise taxes. Yes it is going to take both to get some serious fiscal responsibility. This, however is not the time for austerity.
Posted by Cottonmouth at 7:58 PM 3 comments:

(This is a Guest Post from John Leek's new blog: JohnLeek.com His new blog will focus mainly on the intersection of Christian faith and culture.  Head on over and say hello!)
As a resident of the Mississippi Gulf Coast, who has fished in the Gulf and enjoyed the natural beauty of the marshes and islands, I have plenty of reason to be upset with British Petroleum.  They, and the folks they contract with, have made an awful mess and it can be incredibly upsetting to mind and body to watch the oil continue to move on the news.  Plus, BP seems to have a pattern of playing it fast and loose with those regulations meant to protect employees and the public.
BP needs to make this right and seems to be trying to do so.  Unfortunately some groups, including some I've supported in the past, have decided to "boycott BP."  They seem to want to encourage anger toward BP's individual gas stations for the purpose of gaining new contact information and donations.  This is troublesome because it is misdirecting anger and could hurt individual station owners. 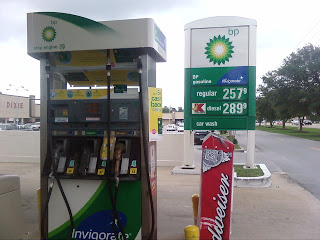 These people seem to ignore the fact that most of these gas stations are owned by individual Americans, many of them immigrants, who are just as powerless to do anything about the spill as you and I.
I stopped by the gas station pictured here in Ocean Springs today and the cashier shared that business doesn't appear to have changed; so boycott talk may all be bluster, but its presence in antagonistic and unproductive.
As Christians we are taught to seek after truth and to do no harm to other people.  We should be careful to take care not to jump into attacking people for perceived wrongdoing.  We should especially be careful when in doing so we might harm people without cause and to no greater purpose.  Let's encourage our friends and neighbors to do the same.
Posted by Cottonmouth at 10:13 AM No comments:

If you like gulf seafood you may be out of luck this summer. Efforts to contain the ever growing oil spill in the Gulf of Mexico have failed so far. Some oil has been burnt off, but just a fraction of what remains, not to mention the hundred thousands of gallons being dumped into the gulf as I write this. A lot of wildlife will perish, sadly. Drill, baby, drill...

(CNN) -- A huge oil spill oozing toward the Gulf Coast on Thursday threatens hundreds of species of wildlife, some in their prime breeding season, environmental organizations said.

The Coast Guard said Wednesday that the amount of oil spilling from an underwater well after an oil rig explosion last week has increased to as many as 5,000 barrels of oil a day, or 210,000 gallons, five times more than what was originally believed.

Posted by Cottonmouth at 7:52 PM 3 comments:

What a sad story that has unfolded in the Gulf of Mexico this past week. First, eleven oil rig workers were killed on an explosion an oil rig in the Gulf. The environmental disaster that is now playing out is a travesty. I remember back when we were having the drill or not to drill arguments on Cotton Mouth a couple of years ago, there was a canard repeated by most of our right wing visitors that there has never been an oil spill caused by an oil rig. What do you guys think now that our precious gulf is in serious danger of an environmental cataclysm?

The spill continues to grow as 42,000 gallons of oil leaks from an underwater well that was broken open when a drill rig exploded and sank last week. 11 workers are believed to have died in the blast. Their bodies have never been recovered.

The slick stretches for about 100 miles across the north-central gulf and is about 30 miles wide at some points.
It's within 16 miles of the mouth of the Mississippi, the U.S. Coast Guard reports.

Efforts to cap the well using remote-controlled submarines have failed. Louisiana officials fear the oil could reach the state's shoreline late Friday or early Saturday and damage shellfish and wildlife.

BP, which owns the oil well, is spending $6 million a day trying to control the spill. The company's CEO said today the explosion could have been prevented and he's putting them blame on the rig owner Transocean Ltd. A spokesman for Transocean has declined to respond to BP's comments. But Transocean's Vice President has said the oil rig had no signs of a problem before the blast.

It will be interesting to see how many safety violations have occurred in the recent past with this drilling outfit. One would hope it would be better than that of the mine owners involved in the recent mining tragedy. Sadly I will not be surprised if it is as bad or worse.

A third underwater oil leak has been located in the pipeline that connected the rig to the oil well, said Doug Suttles, chief operating officer for BP.

Posted by Cottonmouth at 7:46 PM No comments:

Haley Barbour ethically challenged? Citizens for Responsibility and Ethics in Government, a Washington, D.C., based watchdog group, thinks so. Barbour has been named to their America's Worst Governors report. Barbour is charged with nepotism, laundering of campaign finance contributions and turning down federal unemployment assistance in a state with double digit unemployment.

I still can't understand how easily Haley turns his back on the people of Mississippi who are hurting. Much like the Southern Baptist sheep who vote him and his ilk into office, he does not give a tinker's damn about the poor folks.

Citizens for Responsibility and Ethics in Government - Haley Barbour

Citizens for Responsibility and Ethics in Government - America's Worst Governors

Haley Barbour (R-MS) was elected governor of Mississippi in 2003, and reelected in 2007. Under the state’s term limits law, he cannot run for reelection in 2011.

Posted by Cottonmouth at 7:45 PM No comments:

Haley Barbour more than likely ended any chance, real or perceived, of his winning the GOP Presidential nomination. This past weekend top Republican 2012 hopefuls gathered in New Orleans for the Southern Leadership Conference. Such visionaries as Palin, Romney and Huckabee were in attendance. Haley, in an interview with CNN while in New Orleans, came to defense of embattled Virgina governor Bob McDonnell. McDonnell is the governor who declared April Confederate History Month with no mention of slavery. He was forced to apologize the next day, so you think Haley would have had a good idea of the fallout nationally his statement was going to make.

Eugene Robinson lays Barbour to waste in the Washington Post.

What "doesn't amount to diddly" is the revisionist notion -- which Confederate History Month celebrations perpetuate -- that the Civil War was about something other than slavery. The "lost cause" diehards insist that the treasonous rebellion was a fight over freedom or the Constitution or states' rights. But the "right" that was being fought over was the ability to own human beings, compel their labor, buy and sell them as if they were livestock, exploit them sexually and torture or kill them if they tried to escape.

McDonnell's apology, at least, recognized that slavery was nothing to be proud of. It should be noted, however, that Virginia's previous two governors -- both Democrats -- did not feel the need to proclaim Confederate History Month. McDonnell's original proclamation, before he amended it, seemed designed to appeal to a fringe group for whom the Civil War is still an open question.

This is a free country -- for black people, too, thanks to the defeat of the Confederacy -- and so if some white Southerners want to celebrate the "heritage" of slavery, they are welcome to do so. But while they're entitled to their own set of opinions, they're not entitled to their own set of facts. I'd say that Haley Barbour's studied ignorance was "a bad thing," but that would be a gross understatement.

Posted by Cottonmouth at 5:21 PM 3 comments:


In light of Rep. Childers' strong opposition to repealing the president's healthcare takeover, the Nunnelee campaign will today begin highlighting various provisions of the bill and asking why the congressman wants them to remain law.

Obamacare will establish an un-American "individual mandate," forcing North Mississippians to buy health insurance or face a huge fine enforced by the IRS:

While this all sounds scary, it just so happens to not be true. This type if dishonesty has been standard operating procedure for the GOP lately. Repeat a lie until your face turns blue, and hopefully enough fools will think it is true. Death panels, socialism, blah, blah, blah...

Fortunately there are independent non-partisan groups that do fact checking, such as FactCheck.org. Let us see what they have to say about the IRS agents, and for that fact the integrity of Y'all Politics.

Q: Will the IRS hire 16,500 new agents to enforce the health care law?

A: No. The law requires the IRS mostly to hand out tax credits, not collect penalties. The claim of 16,500 new agents stems from a partisan analysis based on guesswork and false assumptions, and compounded by outright misrepresentation.

That pretty much sums it up, but if you still have doubts watch this video.

Hey Y'all Politics and Alan Nunnelee; newsflash, you cannot debate a lie.
Posted by Cottonmouth at 7:43 PM 2 comments:

Back to Cottonmouth Blog